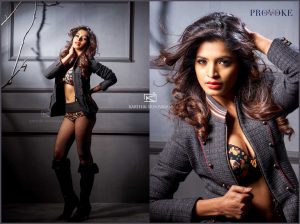 One of the oldest lighting styles for portraiture, the ‘Rembrandt’ style was first popularized by the artist of the same name. This simple yet effective setup can be organized with no more than a single light and reflector, while you can of course use many variations and accent lights to enhance the photograph to your liking.

To achieve the Rembrandt effect, position a light source a little to the side and above the eye level of the model, so as to create partial shadows on the side of the face opposite to the light, the eye being illuminated along with an inverted triangular area below the eye. You can make variations of this by either adding a reflector to soften the shadow area, maybe a secondary light source for the same reason; or create a high contrast image by altogether avoiding any reflector/fill light.

The rembrandt effect can be created using either soft or hard light sources, but softer light generally is preferred for portraiture. This image of actress Sanchita Shetty was created by Karthik Srinivasan on a SONY  Alpha 7R Mark II with a 70-200mm lens.