Why Aperture (Usually) is the Primary Camera Control in Studio 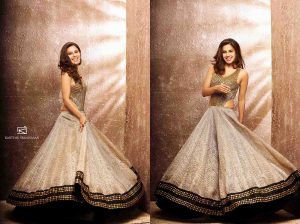 When you begin shooting in the studio, it is only natural for you to meter as you usually do in the outdoors – using the aperture-shutter speed combinations to control the exposure. However, this will not work! The studio flash (or any flash for that matters) is an extremely short burst of light less than 1/1000 sec in duration – this is why a special flash meter is used to measure it, rather than the camera’s in built ambient light meter. Provided that the shutter speed is high enough to cut out ambient light (which is probably the case in studio), it will have little effect on your exposure to alter the shutter speed by a stop or two.

Let us look at this with an example. Check out this image of actress Ranya Rao photographed by KAPA mentor Karthik Srinivasan. It was shot on a SONY A7r Mark II, and a 70-200 lens. Now, most cameras that you will come across ‘sync’ at a shutter speed of around 1/200 sec. This means, it is the highest possible shutter speed at which the camera and lights will synchronize. Anything higher, and you have chances of the shutter not being able to capture the short burst of light. Given the fact that studio lights give you aperture values of f11 and f 16, it would be of little consequence if you were to shoot at 1/100 sec instead of 1/200…So, when shooting in studio, it is safe to simply leave your shutter speed at the sync level and rather work with aperture and ISO alone to alter exposure…UNLESS you are purposely using an extremely slow shutter to let in some ambient light. Once you get the hang of this, you will simplify calculating exposures in controlled studio light is easier than you imagined!