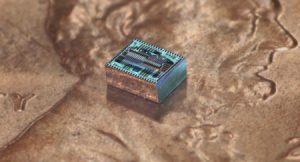 Digital sensors, as we all know have revolutionized the world of photography over the last couple of decades. Cameras have become faster, smaller and pack in more megapixels than they did every previous year. But theres one aspect of a camera that still remains unchanged – the lens. Lenses require a certain amount of space to create an image. Its focal length and focusing distance are still truly optical, and this is what limits the thickness or a mobile phone – optics.

But all that could soon change…a company called Caltech has developed a micro chip that could well do away with optics altogether, at least as we know optics. The image you see of the chip on a penny gives you an idea of the scaling down it can do as far as camera sizes are concerned…The chip contains an ‘Optical Phase Array’ (OPA) that mimics a lens. A lens bends light rays. The OPA manipulates the incoming light, mimicking a lens with a phase shift, and whats more – it has certain advantages over an optical lens! By altering the time delay or phase shift, the chip can ‘look’ in different directions! 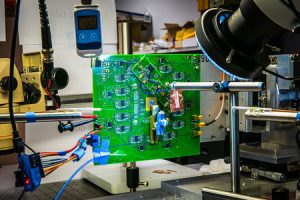 “Here, like most other things in life, timing is everything. With our new system, you can selectively look in a desired direction and at a very small part of the picture in front of you at any given time, by controlling the timing with femto-second—quadrillionth of a second—precision,” says Ali Hajimiri, who has been working on the technology at Caltech.

“We’ve created a single thin layer of integrated silicon photonics that emulates the lens and sensor of a digital camera, reducing the thickness and cost of digital cameras. It can mimic a regular lens, but can switch from a fish-eye to a telephoto lens instantaneously—with just a simple adjustment in the way the array receives light,” Hajimiri says.

The lensless technology is still in its infancy. The current model made by Caltech has an extremely low resolution in an 8 by 8 grid. However, it is technically proven and a matter of time before this is developed further. Hitachi, Bell Labs and Rice University too are working on similar technology, to give you an idea of the seriousness of this new micro chip!