A Little on Photo Rights

Photo rights fall under two broad categories – Royalty Free and Rights Managed. When a client licenses an image under the RF category, they have total rights to re-use, modify or alter the image in any which way they please. In this sense, the photographer gives up any further rights to that client. Under the RM license however, the terms and conditions of usage could be a one-time only usage for a magazine or a website, with many fine details defined in the fine print. Under the RM license, the photographer usually gets long term returns to the image, every time it is used or published.

Leading photo blog Petapixel recently reported many unhappy photographers complaining after they realized their images were used by Microsoft Win 10, on over 400 million devices around the world. Of course, some of the photographers were disappointed with payments of 20-50$, but thats just what the deal is with Royalty Free licenses.

American photographer Neil Kremer commented (as spoken to The Journalist, a Danish publication), “I did not know that Microsoft is using my image. If you’re telling me that 400 million people have seen this image, it’s upsetting. Microsoft is using the image to sell their product and they have only paid me 50 dollars for that image.”

French photographer Benjamin Genieys, whose images were also licensed for Win 10, commented, “This is just an illustration of a major problem for photographers, with a lack of consideration for their work. I guess this is even more difficult to understand from a big company as Microsoft is. I checked on 500px and I just have anonymous buyers for this picture. I sold 2 licences between December 2014 and March 2015 ($35 and $85).”

Photograph by Benjamin Genieys, on 500px – 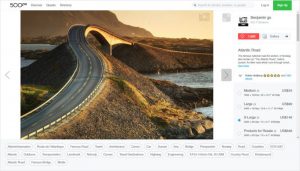 However,Serbian photographer Radisa Zivkovic seems to have understood the possibilities making sales through an RF stock agency license – “I’m pretty surprised that my photo found itself in this role, because nobody contacted about it. At the end I guess that it can be purchased via the stock sites as royalty free license. I more disappointed with payment, but I knew that when I decided to sell photos through microstock sites.”

Microsoft usually credits the photographer on their Bing home page images but not on the Win 10 lock screen. Legally speaking, the company is totally on the right side of the law in either case. RF licenses do not require the user to credit the photographer in every case, as opposed to RM/editorial images.

When signing up with a stock agency and uploading all your work, understand the contract thoroughly! Students at KAPA learn this as a part of their course…